Posted by ConcertHotels on Thu, 29 January 2015

l 3 comments
You find yourself in a garden in North London. There's a little sunshine peeking through the leaves of the trees. It's quite lovely. Or at least it would be, were it not for the two zombies moving slowing towards you and your buddy, ready to feast on your flesh.

Having thrown all you've got at the two - canned goods, a toaster, a mug tree and a couple of dinner plates (aiming for the head of course, you're no amateurs) - you find yourselves out of ammo.

But wait. All is not lost. Your vinyl just might save your life.

Hastily rifling through the collection you're faced with a dilemma - which of these records can you bring yourself to pitch at the walking dead? Sure it's a life or death situation, but that's an original pressing!

Some calls are pretty easy to make:

Some are less so:

We're referring of course to the 'breaking records' scene in Shaun of the Dead. It's a scene which pretty much sums up the debate on Stone Roses' second album - some think it's a decent record, but for others it's total garbage (and therefore using it as a projectile to take out the undead is entirely appropriate).

'You've a lifetime to make your first album, but only a year or two to make your second', (so the cliché goes). This is often touted as the excuse for that difficult second album or sophomore slump.

We decided to see if we could answer the question.

We started out by taking the artists whose albums were featured in Rolling Stone magazine's 100 Best Debut Albums of all Time. We then compared the critics' scores of these artists' first and second albums, using data from Album of the Year. Check out the results for yourself: 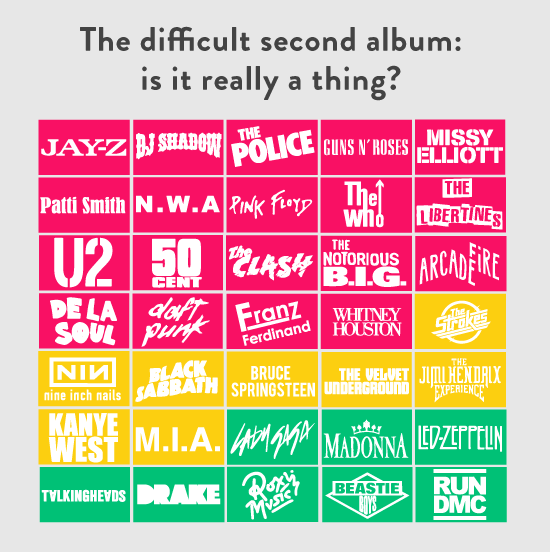 And as usual, we'd love to know what you think?
Tags: music, albums
Tweet
Leave a Comment
3 comments
© ConcertHotels.com all rights reserved